In this post I will propose a way to solve a sudoku puzzle with a computer program, trying to find all the puzzle solutions in an efficient way using an algorithm based on reduction of Uncertainty.

The basic idea and the source code date from 2005, when the puzzle became popular in Europe. 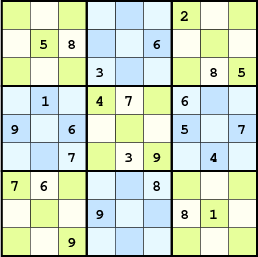 A sudoku puzzle consists of 9×9 squares accepting digits between 1 and 9. A digit placed in a square cannot be repeated in its row, column, or 3×3 grid. Therefore, each square belongs to 3 uniqueness constraint groups (a row, a column and a 3×3 grid), having a total amount of 3×9 constraint groups, 9 of each type.

Each square has a state: a set of digits that can be fit without violating its 3 uniqueness constraints, and therefore the total board state will be the set of all the 81 individual states. Without any information - an empty sudoku - the initial state is the one with the maximum uncertainty: all the digits are possible in each square.

The state of a square gives us a metric of uncertainty, i.e., the number of possible digits. By adding up the uncertainty of each square, we can obtain a global uncertainty metric. Our strategy will be to reduce this uncertainty until we reach the minimum state: the solution.

We have two ways to perform this reduction:

Using only hypothesis involves a typical brute-force algorithm. But in this approach, the use of deductions will allow us to drastically reduce the space where hypothesis are made: the lower the uncertainty is, the less assumptions we will need. The key point is that every time we reduce the uncertainty of a square, we can trigger recursively new deductions in their related squares (the ones belonging to its constraint groups), resulting in a notable reduction of the overall uncertainty of the problem.

The algorithm will therefore consist of applying deduction rules when possible, and hypothesis when necessary, until we reach the solution. If we reach an invalid state, produced by a hypothesis, we rule out that hypothesis and make a new one. The algorithm flowchart is as follows: 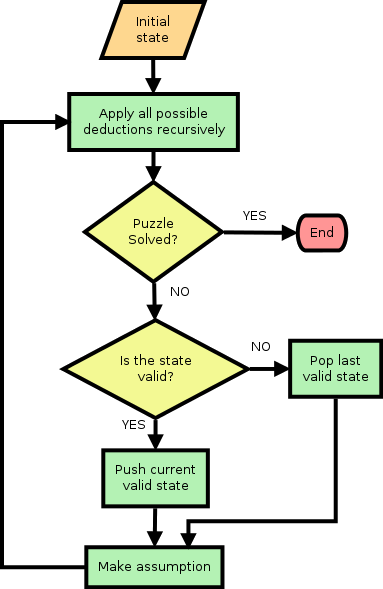 But, how do we exactly make hypothesis and deductions?. Well, making a hypothesis is not a big deal. It could be, say, to randomly pick a digit among the state of a given square (set of possible digits), and suppose it is indeed the correct choice. These are the kind of assumptions we will consider in this program. But we could have chosen other options, like, for instance, assuming that one or more of the possible digits are not possible in the given square. This approach - not explored in this post - could give a better performance, as it could minimize mistakes by choosing more likely options.

Well then, and what about the deductions?. Let’s start with the easy case: if we know that a square contains a given digit, that digit cannot appear in the same row, column or 3×3 grid. That digit can therefore be removed from the state of all the related squares.

Figure 3: Uncertainty reduction in the 3×3 subgrid at the middle. As far as we know the initial value of the above four squares, their digits cannot appear in the other squares of the restriction group.

Let’s say it in a different way: if a given constraint group has a square whose state contains one single digit (no uncertainty at all), that digit necessarily has to belong exclusively to that square, and the uncertainty of the other squares can be reduced.

What if we have, in a given constraint group, two squares accepting the same pair of digits and nothing else?, don’t panic: those two digits must be distributed only between those two squares, no other square in the group can accept any of them, and hence their uncertainty can be reduced by removing them from their states.

Can we generalize this rule? certainly. By simple induction, if we want to distribute a set of N digits among the squares of a constraint group, and there are exactly N squares accepting only digits from that set, those N digits necessarily have to be distributed among those N squares, and the other 9 - N squares can’t receive any of them.

Figure 4: The four numbers 2, 3, 5 and 6 can only be placed at four squares, so those four squares cannot accept any other numbers. Or, alternatively: as long as there are three squares accepting only elements from the set of three digits { 4, 7, 9 }, no other square can accept any of them.

Let’s say it again, in a more formal way this time: given a restriction group C - a set of 9 squares -, let A be the state of one of them - the set of possible digits of that square - and let B be the set of squares of C with their state contained in A. If the cardinal of A is the same as the one of B, then the squares of C which are not contained in B - i.e., C \ B - can’t contain any element of A in their states. Thus, those elements can be removed from their states, and, consequently, the uncertainty is reduced.

That’s all, this is the basic rule, we don’t need anything else, so let’s start programming.

The program is written in C and has been tested under GNU Linux. More details about its usage and board format can be found in the README file.

The source code is quite clear, so I’ll just give some guidelines to help its understanding: