Modeling and simulation of planetary motion

One of my favourite problems in classical mechanics is the planetary motion, and one of my first attempts to solve it with computer algorithms dates from my early teens. My first approach was written in BASIC, and the results were completely wrong, as I didn’t know enough about the underlying maths. Subsequent attempts produced good results once I knew some basics of differential calculus during my high-school years.

In this post I’ll rescue one of those implementations, written in C, which uses the laws of motion to compute astronomical body paths.

Where . For instance, the force with which is attracted towards , including magnitude and direction, and being the unitary vector from to , is 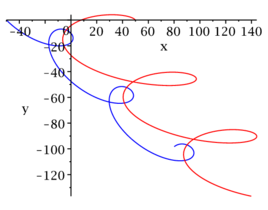 If we also use Newton’s second law of motion, which relates force and acceleration

we can express the problem with the following set of coupled non-linear differential equations:

If we provide the initial conditions, i.e. the initial positions and , and the initial velocities and , we can obtain, from the above equations, the paths and , regardless of the number of dimensions. Particularly, for a two-dimensional problem, where

the set of equations becomes

Figure 2: Same solution as before, but showing the relative motion. The result is an ellipse.

where we have to find , , and . The problem can be easily generalized to dimensions and bodies.

Designing an numerical method to solve the equations

If we discretize the time domain 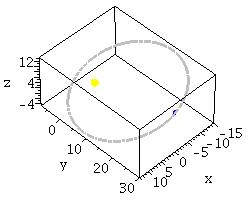 and we apply the following first order finite differences approximations of the differential operators (this is the easiest way, and it’s equivalent to Euler method):

We can compute both the velocity and position of a body , given the force exerted over it, by finding from the above equations

In the link below you have an implementation in C for the two-dimensional case. The code is ancient and platform-dependent, as it uses some basic graphic routines. Originally this code was written for MS-DOS, using the protected mode and the mode 13h. The code was originally compiled with the DJGPP programming platform under RHIDE. As this platform is from the past, you can either run it under an emulator like DOSBox, or compile it using the SDL wrapper that I’ve written for rescuing this and other old code (only tested under GNU/Linux). The wrapper is implemented in files mode13h.h and mode13h.c (the only platform-dependent code), and in order to switch between a native MS-DOS platform and SDL you must use the DOS symbol (when present, it assumes a native MS-DOS platform, otherwise it will use SDL).

The main algorithm is implemented in file newton.c, and, as I described before, it just computes the force exerted over each body, and then velocity and position. 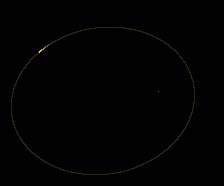 A body is modelled with the struct body_t, which considers the position and velocity. Before starting the algorithm, you must create the bodies with the createBody() function, providing initial position, initial velocity and mass. Also, you can specify whether or not the body is fixed at its position, to simulate fictitious situations, suitable to being validated against Keppler’s laws (you can visually check how the two first laws hold when only two bodies interact). Another way to do this with real cases is by using the bodyref variable: when this variable is not null, the camera will follow the selected body.

Other useful parameters are scale_factor, to fit the required space in the screen, and calculations_per_plot, that allows you to enable frame dropping, computing with enough accuracy without having to plot all the solutions.

The source code includes an example of an Earth–Moon system, where you can check that, given realistic data for the initial values and masses, some other parameters like the orbital period match the known values.

In this video you can watch an execution example of the three-body problem, under DOSBox emulator, where you can appreciate the chaotic behaviour.